Money Matters > Taking Control Of Your Money > Lesson 12: Introduction to dealing with debt

Lesson 12: Introduction to dealing with debt

Activity One: Didn’t see that coming

In Lesson Nine and Lesson Ten we looked at different types of loans and getting a loan.  We talked about questions to ask before borrowing to make sure you can afford a loan.  In this lesson, we look at what happens if you cannot repay a loan.  Debt is when you borrow money from someone or from a financial institution, you owe them money and have to pay it back.  Most people will have debt at some stage in their life.  Problems only occur if the debt becomes unmanageable. In this lesson, students will be asked to come up with a list of circumstances that might cause people to struggle with debt and to identify how being in debt can make people feel.

Activity One: Didn’t see that coming

1.  Explain to the class that debt is when a person owes money.  Debt only becomes unmanageable or problem debt when the person can’t make repayments (an amount of money paid back on a loan) or starts to struggle to make repayments.  While a person can do all the right things and ask all the right questions before borrowing, problems with debt can happen when there is an unexpected change in circumstances.  For example, a person might have less money coming in because of losing a job.

2.  Divide the class into small groups.

3.  Distribute one copy of Student Worksheet: Didn’t see that coming to each group.

4.  Invite each group to come up with a list of things that might lead to a person’s debt getting out of control.

5.  Invite feedback from a sample of groups, recording responses on the white/blackboard. 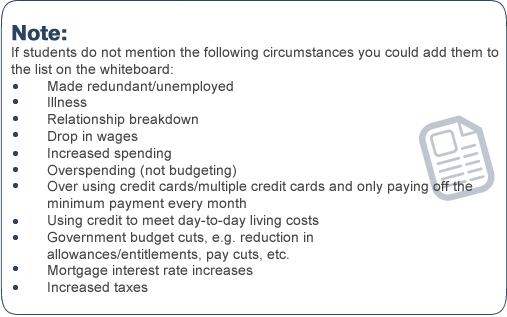 6.  Ask students to look at the list of unforeseen circumstances on the white/blackboard and identify which are the most relevant in society today? Why are these so common now?

1.  Ask the class have they ever needed/wanted to buy something but didn’t have enough money to do so? Ask them how they got the money to buy what they needed/wanted?

2.  Explain that if they borrow money from a friend, family member etc. and promise to repay them back then they are ‘indebted’ to this person. This is called being in debt.

Jack and Jill have been best friends for a long time.  Jack likes to live life to the full and he has a reputation for being a bit careless with money.  Jill is a lot more careful and she is always on at Jack to budget and save.  Jill saves a small amount every month and is quite proud of herself in this regard.

4.  Divide the class into small groups.

5.  Invite half of the groups to imagine they are Jill. They should work together to complete Student Worksheet: Jill’s story.

6.  Invite the other half of the groups to imagine that they are Jack. They should work together to complete Student Worksheet: Jack’s story.

7.  Facilitate feedback from the ‘Jack’ and ‘Jill’ groups using the following as prompts – every time students identify an emotion or feeling during the course of the feedback note this on the white/blackboard under the heading ‘Jack’ or ‘Jill’:

9.  Conclude by explaining to students that when people find themselves in situations where they cannot manage their debt it can be very emotive and stressful, not just for the person in debt but also for family members and friends. However, it is very important to know that it is possible to take control of your debt.  In the next two lessons, they are going to find out what people can do if their circumstances change and they find themselves struggling with debt.

You borrowed money from a friend and because of something that has happened you find that you cannot pay the money back.

Write an email to your friend, describing how you feel, what you are going to do and stating anything that you would like them to do.

The steps for reviewing this homework task are given at the start of Lesson Thirteen.

Taking Control Of Your Money

Haven’t found what you're looking for?